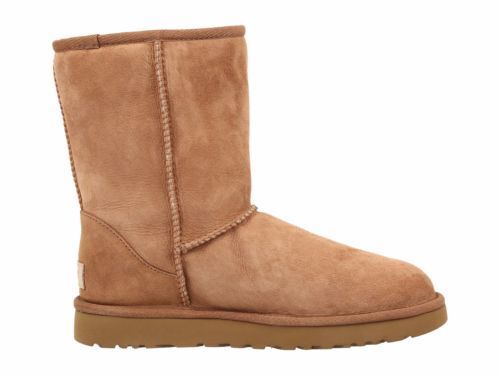 Where does UGG Australia get its sheepskin from?

UGG Australia obtains its sheepskin from Ireland, Spain, the United States, the United Kingdom, and Australia. UGG supports animal welfare and only purchases material from countries that have regulatory standards for the treatment of animals. In Australia, UGG only buys sheepskin and merino wool from certified ceased-mulesed and non-mulesed sources.

What are Classic UGG boots for women?

UGG Australia produces a Classic boot series for women. This UGG series offers boots of many styles that remain staples in the brands yearly catalog. They were originally created for surfers to wear on the beach when they werent in the water. Insoles are foam or UGGPure wool, which adds insulation to the boots. Outsoles are crafted with EVA with patented tread designs for traction.

What are some examples of boots for women?

The UGG Australia family of boots for women changes annually, but here are some examples:

How do you choose the right size shoe for women?

Can you remove the UGG insoles?

You can remove the insoles of your UGG boots and shoes, providing the style of UGG Australia boot or shoe you choose includes removable soles. If you prefer styles with removable soles instead the proprietary cushioning insoles within the boots, bear in mind that they vary from season to season. Here are some UGG Australia styles for women that have removable soles:

Content provided for informational purposes only. eBay is not affiliated with or endorsed by UGG.