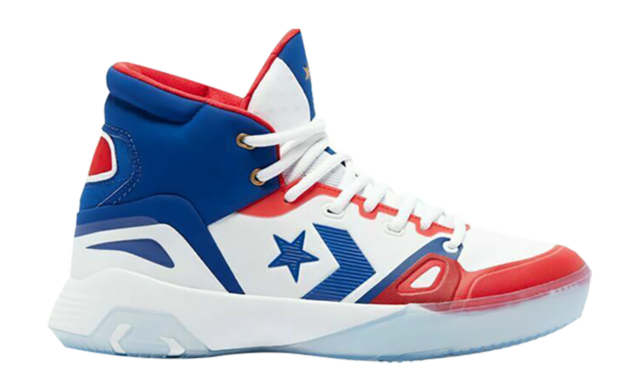 Don't let the love affair with the canvas upper on the famed Converse Chuck Taylor fool you — the brand got its actual start because of rubber. As was common in the day, Converse was born as a rubber company, founded in 1908 in Massachusetts. By 1915, Converse had its first shoes, a tennis design, and another traction-focused creation, all designed to compete with the other big rubber companies-turned-shoemakers.

But what gave Converse the advantage was a shoe created for the basketball court, the 1917 Converse All Star. With a rubber outsole and cotton-based canvas high-top upper, Converse had a winning combination, even if nobody knew about it. That's why Converse hired Chuck Taylor, a former All-American basketball player, to tout the brand in 1921. Not only was Taylor a salesman, but he was an endorser and gave input on the sneaker's design. Over the next two years, Taylor and Converse increased the ankle support and improved the traction. In turn, Converse adorned his name on the side of the shoe in 1923, and the result was the Converse Chuck Taylor All Star.

Converse is most well-known for the Chuck Taylor, but there's a lot more to the name. In the 1970s, Converse bought the B.F. Goodrich company and with it attained the Jack Purcell shoe line made popular in tennis. The skateboarding culture adopted Chuck Taylors, prompting Converse to create its own skate-specific line of shoes to match the demand. Converse also continued to develop performance basketball shoes for a few decades.

Nike purchased Converse in 2004, which helped reenergize the Chuck Taylor with new materials and collaboration opportunities. It also led to the eventual restart of the brand's performance basketball unit in 2019.

The U.S. Army trained in Chucks in the 1940s, Elvis Presley wore them on television in the 1950s, and nearly every college and professional basketball player donned them in the 1960s. When the Chuck made an on-screen debut in Grease, it helped skyrocket the brand. And with color taking off in the 1970s, fans of the shoe could express their unique personalities. To simply say the Converse Chuck Taylor is one of the sneakers to most successfully cross over from sports to culture doesn't do the allure of the style justice.