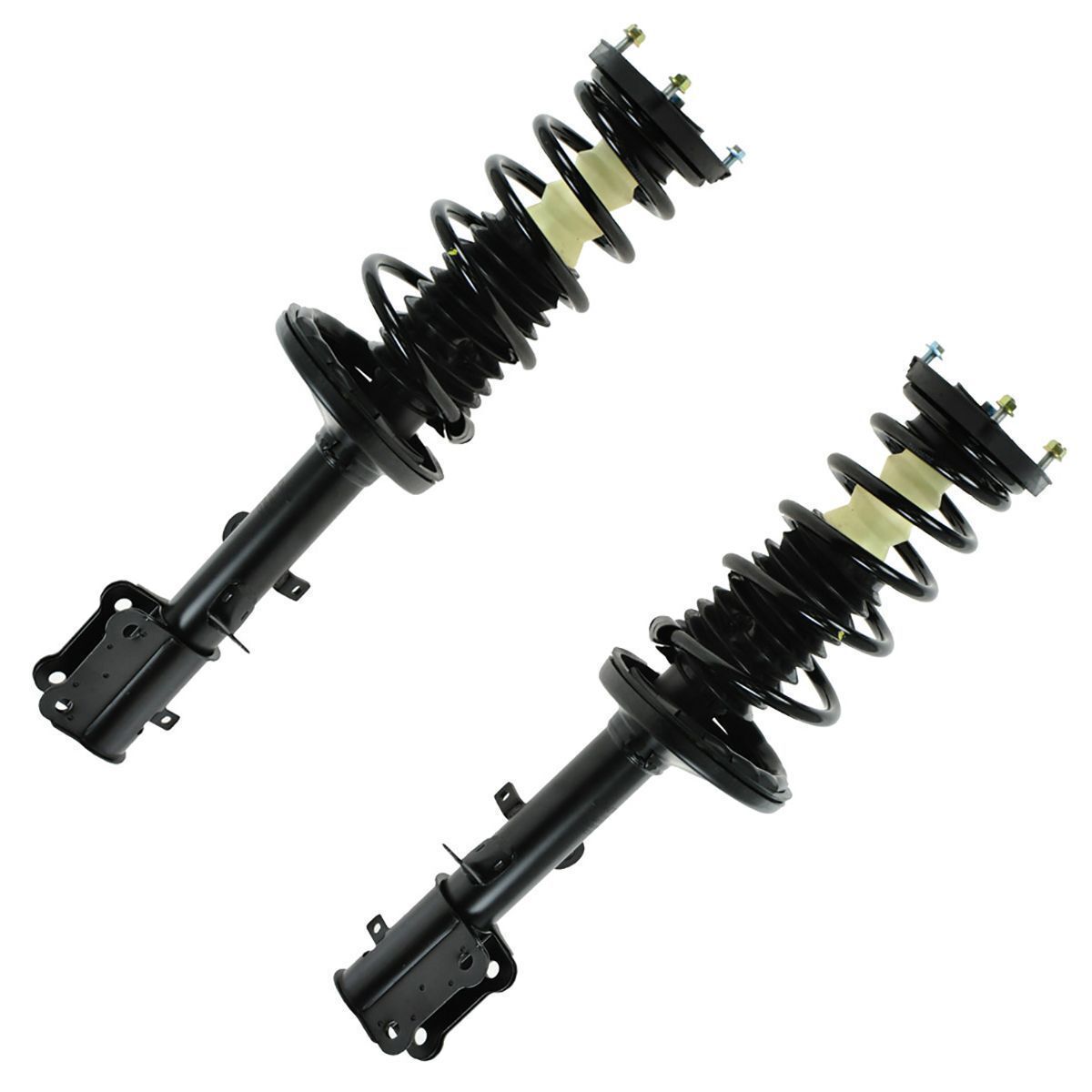 When every road becomes the bumpiest road in the world, maybe it is time to get new struts. Most manufacturers recommend replacing struts and shocks every 50K to 70K miles. Does your vehicle nose dive when you step on the brakes? You can significantly reduce nose diving by replacing your struts/shocks. The shocks and/or struts in your car perform two functions. They dampen spring movements and aid in ride control.

Shocks, struts or even coil springs are produced by various trustworthy, top brands for all types of vehicles. No matter the year, brand or model, you can find the strut that goes with your car here at eBay.

Struts help improve a vehicles handling while turning or braking. At the same time, struts are an important part in the overall comfort level for everybody inside the vehicle. Unlike a shock, which cushions the vehicle from bouncing up and down too much, a strut gives side-to-side stability.

What do shocks do?

The main role of the shock absorber is to control spring and suspension movement. Although it is widely believed that they also support the weight of the car it isn’t so. Shock absorbers change the kinetic energy of the suspension and create heat which is drained through the hydraulic fluid.

Additionally, they take much of the side load placed on the vehicles suspension. As a result, struts have impact on riding comfort and handling as well as vehicle control, braking, wheel alignment and wear on other suspension.

You need to understand some of the terms associated with struts, in order to really get them. Here are some important terms you should get familiar with:

Even though most struts work based on similar principles, they function in different ways to obtain the same result. The above terms might give you some insight into struts in order to help you choose the right strut for your needs.

The three principal types of struts are coilover, gas, and pneumatic. The three of them work on the same goal of reducing the shock of over-the-road travel by diminishing the shock produced through springs, oil, and gas. The table below details all three types of struts:

You should check or replace gas-charged struts in pairs to prevent twisting caused by uneven loading. When replacing struts, it is also essential that the same type of struts is used to replace worn or damaged ones.

In addition to the different types of struts, there are also struts for different parts of the suspension system. This includes the front and rear, as well as the left and right side of the vehicle.

The strut helps dampen the shock produced from braking, especially the forces produced from sudden stops when they are in the front. On the other hand, a rear strut helps keep the back end of the car from bottoming out from a high rate of acceleration.

Remove the current strut to determine the correct strut size needed. This task could be kind of difficult for DIYers; however, you can just get a complete strut assembly that will eliminate the issue of disassembling all its components, which is the trickiest part of the process.

Then, you can take their measurements, any lettering or numbering on the strut and use them while shopping eBay online to find replacements. This information will allow you to choose the correct strut for the vehicle if you want to buy them online. The following sections contain common sizes for coilover, gas, and pneumatic struts.

The following table contains both the stroke and extended lengths of some coilover struts.

When shopping for coilover struts, be sure to get the correct size strut for your vehicle.

The following table contains the diameter of both the shaft and tube of gas and pneumatic struts.

When replacing struts, make sure to purchase the right size struts. The wrong size strut can cause a failure with the suspension and damage the vehicle and the strut.

Before deciding on a specific product, carefully read the details in each product listing.

When replacing struts, make sure to measure them for size, if possible, in millimeters. This includes both the strut stroke length and the extended strut length. You should also note any numbering or lettering printed on the strut.

But before buying struts, you must remember to investigate the available options and learn about the different types of struts on eBay.

Do all vehicles have struts?

Not all cars and trucks have struts; many suspension designs use separate springs and shock absorbers, with the shocks supporting no weight. Also, some cars use struts only on one pair of wheels, usually the fronts, while the other pair employs a different design using separate springs and shocks. When a car has struts on the front wheels only they are usually MacPherson struts, which are struts that are also considered part of the steering system because the wheels are designed to pivot around them.

Why do some vehicles use struts while others have separate springs and shocks?

This comes down to initial cost (advantage: struts) and handling and performance (advantage: certain suspension designs without struts ... usually). But there are exceptions to these patterns; for example, most sports cars employ what’s called a “double wishbone” suspension, which uses shock absorbers rather than struts, but the Porsche 911 for example, uses struts.

How can I maintain the struts in my car?

If your car has struts or shock absorbers you will want to have them inspected periodically for leaks or other damage. One difference is that when they do wear out, struts are more expensive to replace, but there’s nothing a driver can do about that. Regardless of what suspension system your car has, be sure to have it inspected regularly.

Damaged, leaking, or worn struts should be replaced as soon as possible. This helps prevent strut failure and keeps vital vehicle components, such as tires, wheels, and the suspension, from wearing out too quickly.